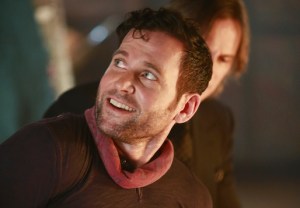 This week on ABC’s Once Upon a Time, “The Voice: Battle Rounds” took on new meaning as Hook labored to get back Ursula’s happy ending, while August’s return boded well for the heroes.

For starters, this was the best episode of Season 4B thus far. The flashback story was fresh, unpredictable and related directly to the present-day goings on. Meanwhile in Storybrooke, Hook’s deal with Ursula offered up a few twists, including the return of Ariel (in a manner that tracked decently enough, save for one quibble) and the welcome arrival of Ernie Hudson’s Poseidon in our world (though I was kinda hoping he had been living here as a bait shop owner or fishmonger).

Also, the torturing of August evoked one of Pinocchio’s most famous traits, as Gold dangled the puppet’s “lie detector” nose near the fireplace as it grew with every fib. The fact that August was able to claim he didn’t know where the door was, and not be found a liar, was smartly played — as well as served up the most interesting part of the Author storyline to date, the fact that the sought-after scribe is trapped in the storybook, behind the illustrated door.

As an added bonus, toward episode’s end, Hook raised a valid point that I for one hadn’t yet considered: that if villains don’t get happy endings, and if he is by definition a baddie, he is fated to lose his. Emma quickly notes, “That means you must have found it. What is it?” “You,” he responds, leading into a kiss whose sweetness was punctuated by a single tear from J-Mo. Terrific moment.

* The heroes now know that Gold is back in town — and that he posed as Hook when taking the dagger from Belle, who felt plenty dopey for botching that one. All that was missing was a forehead slap.

* I know Regina explained it to us, but I’m still unsure what to make of her Robin Hood/Evil Queen dream. But I’m curious what Emma comes up with in terms of contacting Robin. Think he’s on Facebook by now?

* Squid ink sure is a multi-purpose substance, eh?

* My aforementioned quibble: While I appreciated the “shrunken ship” twist dovetailing not only with Will’s Wonderland past but also the previously established Arendelle/Blackbeard storyline, what, Elsa has non-ice, shrinking powers…?

What did you think of the episode “Poor Unfortunate Soul”?