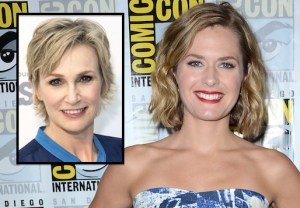 Maggie Lawson can now consider Jane Lynch her own Angel From Hell.

TVLine has learned that the Psych alumna has landed the second lead role in the single-camera CBS comedy pilot, as Allison, a multi-tasker and perfectionist who is leery when a woman named Amy (Glee grad Lynch) shows up claiming to be her “guardian angel” and new best friend.

Allison is inclined to believe that Amy is just a nutjob — except that every last one of the stranger’s pronouncements comes true.

Angel From Hell is penned by Scrubs alum Tad Quill.

In addition to her eight-season run on Psych — where Lynch once guest-starred as the sister of Kirsten Nelson’s Karen — Lawson has starred on ABC’s Back in the Game and recurred on the final season of CBS’ Two and a Half Men.

Her Psych costars James Roday and Dule Hill in recent weeks have booked pilots of their own: ABC’s untitled family comedy fka The Brainy Bunch, and the CBS legal drama Doubt.