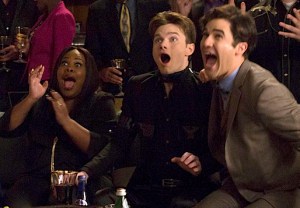 Glee‘s two-hour swan song was heard by 2.6 million total viewers — up 30 percent week-to-week to deliver the Fox drama’s largest audience since April 8 — while averaging a 0.8 rating, ticking up to match its season high.

Because someone (or at least I) will wonder: Glee‘s official Season 1 launch drew 7.5 mil/3.5.

TVLine readers gave the series finale an average grade of “B+.”

Elsewhere on the night, as CBS’ NCAA tourney coverage averaged 3.8 mil and a 1.2:

VIDEOS Hart of Dixie Finale Trailer: Zoe and Wade Welcome Their Son — and Say ‘I Do’?

THE CW | Hart of Dixie‘s penultimate episode (1.4 mil/0.4) added some eyeballs while flat in the demo.