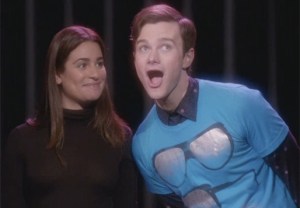 The first half of Friday’s series finale (Fox, 8/7c) flashes back to the New Direction members’ first encounters in 2009, featuring a musical nod to one of the show’s longest-running rivalries.

I’m referring to Kurt and Rachel’s never-ending battle for diva supremacy, which finds its roots in TVLine’s exclusive clip from the finale, in which the duo struggles to share the spotlight for a performance of “Popular.”

Longtime Glee fans will recall Rachel and Kurt’s infamous diva-off to “Defying Gravity,” another Wicked tune, in Season 1, followed by an encore four years later in the show’s 100th episode.

Hit PLAY on the preview clip below, then drop a comment: How do you hope Glee ends?