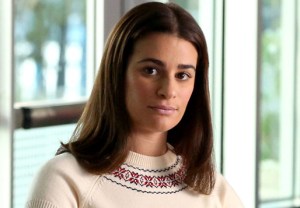 Bending the rules of space and time as only Glee can, Friday’s series finale flashed back to each of the New Directioners’ origins before revealing what their futures have in store — and it was perfect.

To illustrate just how much things have changed during the past six seasons, “2009” began with a still-closeted Kurt getting slapped with an unthinkable ultimatum: join an extracurricular team… or sacrifice his precious sewing machine. A chance meeting with Rachel Berry — of whose MySpace videos he was a big fan — led Lady Hummel to the glee club, though Rachel was quick to clarify that she had no intentions of sharing the spotlight with him.

Speaking of sharing the spotlight, we also got to relive the birth of Rachel and Mercedes’ rivalry, which was never technically resolved (unless you count TVLine’s ranking of Glee‘s top 10 divas as gospel, which I do). Then again, perhaps Mercedes’ mom(?)’s wise words — “stars have a way of finding each other” — means the rivalry was never meant to end; competing makes them both better.

The tricky thing about flashing back to 2009, of course, is that Glee had to do so without the use of the late Cory Monteith, a challenge the show tackled flawlessly. Iconic Finn moments were alluded to — like when Will said he was headed to the locker room, where he first met Finn in the pilot — and he was mentioned by name during several subsequent conversations, including one in which Kurt revealed exactly how he felt about him. (And then there was the original footage of the cast performing “Don’t Stop Believin,” which was absolutely gut wrenching in every sense of the word.)

And in an even twist-ier twist, Mercedes had a brief run-in with Blaine(!), proving he did exist before Season 2. (A previous theory suggested he emerged from an oil spill during that summer hiatus before integrating himself into the lives of the New Directions. Theory disproven!)

The second hour, appropriately titled “Dreams Come True,” caught up with the present day — New Directions won, by the way! — before turning the clocks forward for a peek into everyone’s futures. Here’s a quick breakdown of what lies ahead for Rachel and the gang: 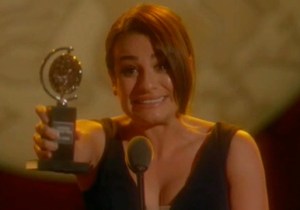 * Not only does Rachel snag a Tony Award (!), but she also marries Jesse St. James (!!) and becomes the surrogate mother for Kurt and Blaine’s child (!!!)

* McKinley High becomes a performing arts school, of which Will is named principal.

* Sam becomes the New Directions’ new leader. (Was anyone surprised that he made “country” his first weekly theme?)

* Beyoncé enlists Mercedes as the opening act in her world tour. Mer doesn’t, however, get back together with Sam — despite his incessant texts.

* Kurt and Blaine live an expectedly fabulous life in New York, where they serve as inspirations to the tiny gays of all five boroughs.

* One of Artie’s movies gets into a film festival, and he gets back together with Tina!

* Sue takes her insane brand of politics to the White House, serving as Vice President of the United States under President Jeb Bush. (And “you bet your sweet ass” she’ll be running for president.)

* The McKinley High School auditorium is renamed after Finn Hudson.

Gleeks, did the series finale live up to your expectations? What do you think of everyone’s futures? And which familiar face were you happy to see return? Grade the episode below, then drop a comment with your full review.