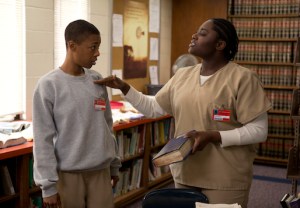 Just like incarceration itself, the Emmys have decided, Orange Is the New Black is no laughing matter.

The Academy of Television Arts & Sciences has ruled that the Netflix series must compete as a drama in the running for this year’s Primetime Emmy Awards, our sister site Variety reports.

RELATED Emmys 2015: Are Taraji P. Henson and Viola Davis About to Make History?

On Tuesday, The CW’s Jane the Virgin, Showtime’s Shameless and Fox’s Glee — all considered “dramas” under a recent rules change that defined comedies as programs 30 minutes or less — were granted comedy eligibility via an appeals process. OITNB‘s request for a waiver, however, was denied.

“Orange Is the New Black is a truly pioneering series and an iconoclast which has always defied genre or easy categorization,” Ted Sarandos, Netflix’s chief content officer, told Variety. “While we’re disappointed in the committee’s decision, we believe that Orange represents the best of television in either category.”

What do you think of the Academy’s ruling? Sound off in the comments!