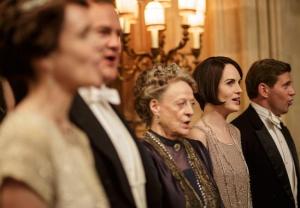 Good news, Downton Abbey fans: You will not be subjected to Lady Mary’s nursing-home years. And the reason brings us to some bad news: The PBS phenom is going the way of Isis the dog.

Multiple sources confirm to TVLine that Downton‘s upcoming sixth season will indeed be its last.

UPDATE: On March 26, the news was officially announced, with EP Gareth Neame saying in a statement:

Millions of people around the world have followed the journey of the Crawley family and those who serve them for the last five years. Inevitably there comes a time when all shows should end and Downton is no exception. We wanted to close the doors of Downton Abbey when it felt right and natural for the storylines to come together and when the show was still being enjoyed so much by its fans. We can promise a final season full of all the usual drama and intrigue, but with the added excitement of discovering how and where they all end up…

The decision to end Downton was mostly a practical one — the cast’s contracts expire at the end of Season 6 and, with one or two possible exceptions, the actors are ready to move on.

“You can keep the show going without Matthew and Sybill, but you can’t continue it without the entire Crawley family,” an insider notes.

A spokesperson for NBC Universal (the parent of Downton producer Carnival) declined to comment for this story.

Setting an end date now allows Downton creator Juliian Fellowes to send the series out on a satisfying note, before turning his attention to his long-gestating NBC drama The Gilded Age.

Earlier this month, the Dowager Countess herself, Maggie Smith, acknowledged that the end was near. “I can’t see how it could go on,” she told the Sunday Times. “I mean, I certainly can’t keep going. To my knowledge, I must be 110 by now. We’re into the late 1920s.”