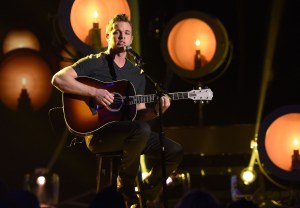 “Yo, Shonda Rhimes, I love ABC’s #TGIT programming block. And I’ma let you finish. But American Idol just had one of the craziest Thursdays of all time!”

OK, I’m sorry. You probably didn’t come here expecting a Kanye West reference — @KimKierkegaardashian’s genius Twitter feed is more my style — in an Idol recap. But my brain just went from the frying pan into the active volcano after Season 14’s Top 10 performance telecast (a confusing label, given that there were 11 singers on stage all night, with one awaiting the bad news that he or she was the lowest vote-getter and at risk of elimination).

With 20 minutes to go, Qaasim Middleton and the uni-monkiered Jax found themselves playing the role of the mouse and the cheese in “Farmer in the Dell” — or, to put it in non-nursery rhyme terms, they stood alone as the final two hopefuls who hadn’t been sent to safety by host Ryan Seacrest. (Side note: After 14 seasons on the show, doesn’t this man know you don’t unleash a trio of dripping ice-cream cones into a live telecast situation?)

Yeah, early front-runners Quaasim and Jax stumbled harder last week than Madonna Under the Weight of That Evil Cape at the Brit Awards last month (handy image embedded for the uninitiated), but still, how could it be that one of the season’s two most buzzed-about and risk-taking performers was about to be sent to the guillotine in 11th place? (And after the fabulous Sarina-Joi placed twelfth? Illegal!)

We’d already experienced the Juju Eyeball of Harry giving a labored definition of the word “arrangement” (dude, America’s not that dumb!), J.Lo delivering one of the episode’s most pleasing vocals (maybe she’s born with it, maybe it’s Auto-Tune?), and guest mentor Nile Rogers not once making a reference to his masterwork “Upside Down.” But Daniel Seavey outlasting Qaasim or Jax? Call 9-1-1, ’cause something illegal is going down, America!

Thankfully, (in)saner heads prevailed. Despite getting the lowest number of votes, Qassim earned himself a save with an imperfect but perfectly maniacal rendition of “Come Together.” Sure, if you isolated the vocals, you’d have detected some hinky notes and a struggle to stay in the pocket. But those are the kinds of issues that should result in an eighth- or seventh-place finish (should he not iron ’em out). 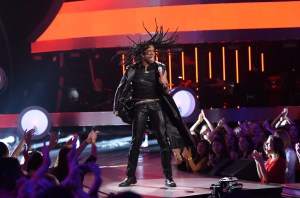 And since I am generally not a fan of the Judges’ Save — the public should do what it does, methinks — I’m glad it’s off the table right quick. And I’m glad it got used on someone who’s at least shown us flashes of brilliance — spikes and flatlines on the heart monitor rather than just a snooze-inducing blip-blip-blip… (Yeeesh, remember last year when they used it on Sam Woolf?)

With that said, let me get down to business and offer my letter grades and reviews for tonight’s performances:

Adanna Duru – Jennifer Hudson’s “Love You I Do” (Dreamgirls) — Grade: B | Yeah, the opening verse got trapped under the weight of the band, but Adanna stayed the course and delivered some killer glory notes while working the stage like a pro. I’d still like to see veer toward the gritty pop spectrum rather than pretty R&B, but she’s slowly becoming one of my faves this season.

Daniel Seavey – Adam Levine’s “Lost Stars” (Begin Again) — Grade: D | From the wince-inducing opening falsetto section to the “please tell me I didn’t hear that” recitation of a lyric about one-night stands, Daniel’s performance was never more than four steps away from the intersection of Excruciating Ave and “Mommy, Make It Stop” Blvd. Props to the 15-year-old for maintaining high spirits in the face of the judges’ dubious comments, but alas, he’d be a better fit at this point for the SwayBot pit than the actual Idol stage.

Rayvon Owen – The Bee Gees’ “Stayin’ Alive” (Saturday Night Fever) — Grade: B- | I appreciated Rayvon’s attempt at reinventing a ditty everyone knows with some intricate rhythms and a little added funk on the bridge. (And yes, the howl toward the end was hotter than a four-year-old MacBook Pro that’s been running for 16 hours.) But there was a tentativeness to the delivery and some issues with pitch that left the talented hunk in the middle of the pack rather than atop it. Harry’s advice — find a song with lyrics that actually mean something to him — might complete the not-yet-finished puzzle of Rayvon’s Idol journey.

Nick Fradiani – Kenny Loggins’ “Danger Zone” (Top Gun) — Grade: B- | Harry gave almost the same advice to Nick as he gave to Rayvon — pick a song with lyrics that are meaningful, dammit! — and I had to agree. Without a true sense of emotional connectedness, Nick came off like a very competent frontman for a Daughtry cover band — and that’s a low-down shame, considering the competition’s oldest competitor has given us glimpses that he’s far, far more interesting than that. 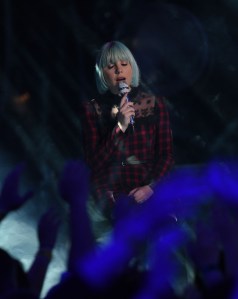 Joey Cook – Michael Andrews and Gary Jules cover of “Mad World” (Donnie Darko) — Grade: B+ | Will y’all forgive me for robbing Joey of an A- just because, as an Idoloonie of the Most Ridiculous Order, I feel she should’ve left the Adam Lambert “Mad World” jersey hanging from the stadium rafters? (I know: I’m the WORST. But still, these kids need to know their history!) Taking aside the Season 8 wonderboy’s rendition (aka only cover of the song anyone needs to hear), Joey really did sound lovely — the nooks and crannies of her tone soaking up the sadness and insecurity of the lyric. Girlfriend has had three straight terrific performances — and the look in her eye during critiques told me she might be realizing she’s higher in the Season 14 pecking order than she’d ever imagined she’d be.

Tyanna Jones – Elton John’s “Circle of Life” (The Lion King) — Grade: C+ | Like Joey, Tyanna should’ve recognized that Jennifer Hudson owns the Lion King classic when it comes to the Idol universe — especially since she did nothing to distinguish her rendition from the Season 3 standout’s aside from going flat on at least half the notes. There was one Gospel growl at the end that made me want to lift the lion cub in the air, but mostly I was not feeling the love tonight. 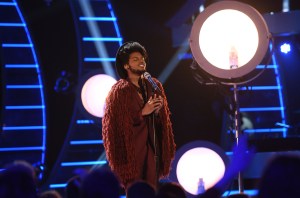 Quentin Alexander – John Travolta and Olivia Newton-John’s “You’re the One That I Want” (Grease) — Grade: A- | I think Harry went a little overboard calling this performance “horribly out of tune” — when really, there were just a handful (OK, maybe two) of iffy notes. But what Quentin lacked in precision he made up for by turning Grease’s boppy ditty into a full-length tale of unrequited desire. Those final refrains — which started plaintive and hushed, and then got increasingly more forceful — were so specifically crafted (for the one Quentin wants) that even a German watchmaker would be all, “Mmm-hmm, that’s right.” I won’t lie, either: The final eyebrow raise (+ shaggy maroon coat) took this one from B+ right into A- territory.

Maddie Walker – Deniece Williams’ “Let’s Hear It for the Boy” (Footloose) — Grade: C | I felt for Maddie that her rumored burst appendix prevented her from mentoring and extended rehearsal time this week — because somewhere under the J.Lo length short-shorts and slightly frightened eyes lies a big ole’ country voice with all the potential for a genuine breakthrough moment. Trying to arrive at that point with a dated/peppy ’80s anthem, however, proved as futile as trying to get from L.A. to the Great Lakes on a three-legged mule. And in a season deep, I seriously doubt she’s going to get herself another opportunity.

Clark Beckham – Maroon 5’s “Sunday Morning” (Cheaper by the Dozen 2) — Grade: A- | Whoa! Does Clark have an evil twin brother? Because the sensitive sex-bomb whose acoustically jazzy “Sunday Morning” gave the Idol audience you-could-hear-a-pin-drop fever cannot be the same dude who slipped musical Lunesta into everyone’s cups last week on “Takin’ It to the Streets,” can it? This time around, Clark seemed to tenderly place every word and note exactly where it belonged — and while Keith’s note that it could’ve used a little more “smile” (or as I call it, liveliness in the face) wasn’t off the mark, I’m guessing that come Friday afternoon, Mr. Beckham will be atop the vote-getter board they almost certainly have in a high-security office somewhere inside 19 Entertainment/Fremantle Media HQ/Fox. 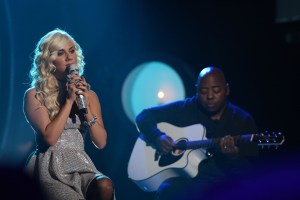 Jax – Adam Sandler’s “Grow Old With You” (The Wedding Singer) — Grade: A | No lie: I actually was moved to tears by Jax’s whispered declaration of care and undying devotion this week — something I thought I would/could never say about a piece of art originally brought to us by Adam Sandler. Sitting on a stool and offering just the slightest hint of humor to the intimate lyrics, Jax delivered on Nile Rodgers’ “less is more” advice — and proved there can be tremendous payoff in what Harry called her “high risk, high reward” formula. (As with almost everyone this week and going forward, Jax’s success or failure in this deep field is gonna come down to song choice.)

Qaasim Middleton – The Beatles’ “Come Together” (Across the Universe) — Grade: B+ | I know in last week’s Reality Check (embedded below) I wondered aloud if Qaasim was the (vocally) naked emperor — and I’m not 100 percent sure he answered the question during his physically fearless, grittily funky twist on “Come Together” (a song that has now made its way onto my “covered too many times on Idol” list). But do we really want a Season 14 without four or five more weeks of his wicked showmanship and almost frenzied commitment to throwing every cell of his being into his stage show? I sure don’t. I’ll admit pulling an actual joker card out of his pocket as he sang “got to be a joker” was too literal by half — but the opening half of the number was pretty solid pitch-wise… enough to keep him in the Season 14 deck, in my opinion.

On that note, I turn it over to you! What did you think of Top 11 performance night? Who were your faves? Who’s at risk? And should the judges have used their only Save of the season? Take our poll below, then sound off in the comments!