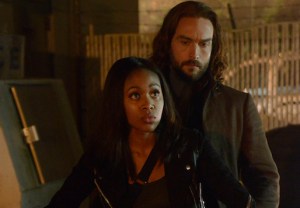 Sleepy Hollow has a new head — and, more importantly, a future.

Fox on Wednesday renewed the history-twisting drama for an 18-episode third season after closing a deal with The Glades‘ Clifton Campbell to take over as showrunner.

Campbell replaces Mark Goffman, who stepped down earlier this month in the wake of Sleepy‘s rocky second season, which saw ratings slide 40 percent versus Season 1.

“I had the pleasure of working with Clifton on both The Glades and White Collar,” noted Fox president David Madden in a statement. “He is an excellent producer, and we can’t wait to see what this team has in store for Season 3.”

Per Fox, Season 3 will explore the evolving partnership between Crane and Mills after the pair scored a decisive victory over evil in the Season 2 finale.

In addition, TVLine has learned that the series will move production from Wilmington, N.C., where it shot Seasons 1 and 2, to Atlanta.