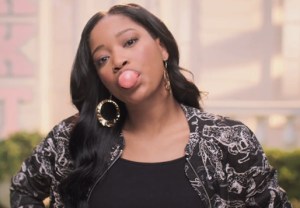 Premiering this fall, the first season of comedy-horror anthology Scream Queens takes place at a college campus rocked by a series of brutal murders. Little is known about Palmer’s character, but by the looks of that demonic bubble gum, I think it’s safe to put her in the unsafe category — right next to Roberts.

Watch Palmer’s Scream Queens promo below, then drop a comment: Will you be tuning in for Ryan Murphy’s next freak show?