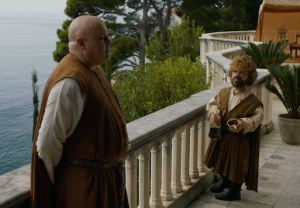 “I believe men of talent have a part to play in the war to come.”

Varys declares that, verbatim, to Tyrion in one of two new videos heralding Game of Thrones‘ upcoming fifth season — but Jon implies the exact same sentiment while talking with Mance Rayder in the other.

HBO on Wednesday released two snippets from Season 5 — which premieres April 12 (9/8c) — as well as a handful of new shots from episodes to come.

The videos give us a brief glimpse of Jon exhorting the King Beyond the Wall to join Stannis Baratheon in the battle ahead, and of Tyrion and Varys discussing why the Spider freed Kingslayer 2.0.

After you’ve watched the clips below (which may look familiar to fans who signed up with threeeyedraven.com a while back), be sure to scroll through our updated photo gallery to get your first look at the Sand Snakes (the seriously scary daughters of the slain Oberyn Martell), a grown-up Myrcella (Joffrey’s sister, who was sent to Dorne a while back) and much more.