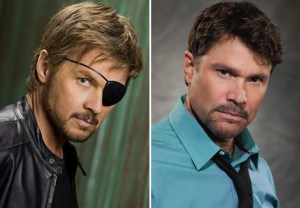 Two Days of Our Lives favorites are booking return trips to Salem, just in time to celebrate the NBC soap’s 50th anniversary.

Stephen Nichols (as Steve “Patch” Johnson) and Peter Reckell (as Bo Brady) will appear later this year, some time before Days turns the big 5-0 on Nov. 8, Soap Opera Digest reports.

Nichols was last spotted in Salem in 2009, while Reckell bid the town adieu in 2012.

* Lifetime on Wednesday announced premiere dates for the next two films in its Flowers in the Attic franchise. If There Be Thorns will air Sunday, April 5, at 8/7c, followed by Seeds of Yesterday on Sunday, April 12, at 8 pm.

* The second season of Starz’s Power will premiere Saturday, June 6, at 9 pm.

* Esai Morales (Criminal Minds) is joining the cast of El Rey Network’s From Dusk Till Dawn: The Series, as Lord Amancio Malvado, a terrifying figure with a dangerous grip on Eiza Gonzalez’s Santanico.