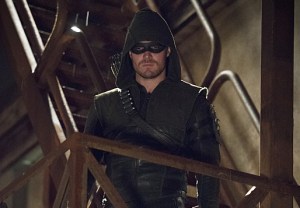 The CW’s Arrow returned this week with an episode that clearly illustrated the stark differences between it and sister superhero series The Flash.

Because whereas the lighter, brighter The Flash let loose Tuesday night with an hour that closed with a breathless, almost manic final 10 minutes, Arrow — by the nature of the storyline at hand, I suppose — needed to be talkier, more brooding.

But how much of everybody being angry at everybody can a person sit through over the course of forty-some minutes?

Picking up right where we left off, Ra’s pitched Oliver, hard, on becoming his heir, on saving a world versus just one city, with infinite resources at his command. The ticking clock for Ra’s is the unnamed Lazarus Pit, waters that “permitted me to live way beyond my time,” but have started losing their effect. As a sign of good faith as Oliver mulls the overture, Ra’s sets free not just Diggle but also Malcolm, to return home.

Once Oliver resurfaces in Starling City, Thea puts it best a la “How many times can I say ‘Thank God you’re alive?'” But then everyone digs in their heels and expresses righteous indignation at Oliver’s rescue of Malcolm. (Worse for Thea, though she is relatively rational about it: Malcolm spends the episode “healing” on her sofa.) Then, Ra’s al Ghul’s “prophecy” begins coming true — that the city (meaning: Captain Lance) would turn against the Arrow, that Oliver despite his crusade would die alone (because: Felicity is with Ray). That puts Oliver in a sour mood, questioning aloud more than once: “What have I accomplished?”

To that, Felicity says that just as she, Diggle, Roy and Laurel, during one of his previous deaths, had to decide what they were fighting for, it’s now his turn. 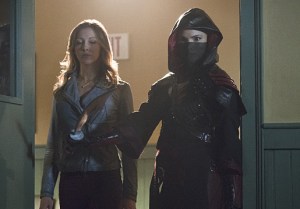 Meanwhile, Laurel, Thea and Nyssa each have sad, verbal jousts with their respective dads. Quentin says that his hurt is nothing Laurel can “save,” that he might not ever forgive her for lying about Sara. Thea tells Malcolm that she never thought she could hurt worse than she did when he came into her life — and yet now here she is, wrecked, wondering what exactly, pray tell, he has taught her. And Nyssa tells Ra’s, “I will not stand here and watch you hand over my legacy to an outside” — to which he coldly answers, “Then don’t.”

Ultimately, a run-in with a generic band of thieves led by Murmur, a sewed-mouth goon out for revenge against Lance, helps Oliver remember his purpose – -that while he started out looking to right his father’s wrongs, now he does the thing he does for the families of police officers counting on Team Arrow to get the boys in blue home safe. Which… rings a little hollow, in my opinion. For one, it undermines the integrity of the police force. And two, it makes it sound as if the city would crumble in Arrow’s absence — when just a few weeks ago, we saw how everyone banded together as a galvanized community. Whatever the case, Maseo shows up to get Oliver’s answer — no — and then warns of the consequences for defying the story Ra’s hath already writ.

As the episode draws to a close, Nyssa heads out to dinner with Laurel (whom she has offered to train) to ruminate over their respective daddy issues; Thea shows up at Roy’s (lips) to remember who she once was; and a green archer whacks two of Murmur’s remaining goons — though it’s not Oliver but Ra’s, apparently out to sully the Arrow’s name…?

Meanwhile, the flimsiest flashback C-story ever can be summed up in seven words: While helping hide Akio, Oliver saw Shado.

NOTABLE QUOTABLES:
* “I suppose congratulation and ‘Why oh why would you do that?!’ are in order.”
* “You still need training.” “When are you going to stop telling me that?” “When you no longer need training.”
* “It’s the League of Assassins — that is not the name of a nice group.”
* “During the fighting, your technique was competent.” “Why do I have the feeling that’s your idea of a compliment?”

What did you think of “The Offer”?