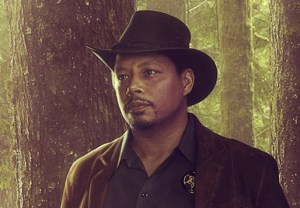 Terrence Howard will remain in overprotective mode after Empire’s first season wraps this Wednesday, as the sheriff of Fox’s Wayward Pines (premiering Thursday, May 14).

On the eerie mystery series, his Arnold Pope has tough choices to make — though about more consistently (and literally!) life-and-death matters than even the powerful Lucious Lyon deals with on Fox’s freshman hit.

In the featurette below, Howard tells of how Sheriff Pope was “hand-picked” to lord over the strange town that FBI agent Ethan Burke (played by Matt Dillon) finds himself stuck in while investigating a colleague’s disappearance. The video also gives you a taste of life in Wayward Pines, including its chanted motto and a few of the “rules” (as recounted by the luminous and ageless Carla Gugino).

Do you plan to pay Wayward Pines a visit this spring?