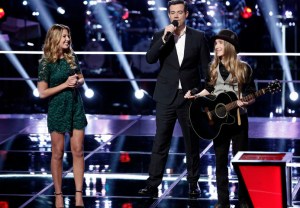 This is how The Voice Season 8 Battle Rounds end — not with a bang, but three performances draaaagggggggged out over the course of a one-hour telecast.

It says a lot about young Sawyer Fredericks, then, that my pulse is still racing despite the episode’s sluggish pacing. This self-possessed 15-year-old with Pantene-commercial tresses and a very distinctive tone seems almost guaranteed to be a part of the competition well into spring — with only a truly terrible (aka “unique”) arrangement from Coach Pharrell capable of knocking him off his path to greatness.

As for the other two Tuesday-night Battles? They proved as unsurprising as the contents of Blake’s cup or Pharrell’s penchant for chapeaus — not that there’s anything especially wrong about either of the above.

Before I inadvertently insult a hard-working coach, let me get to ranking tonight’s Battles from least- to most-promising winner:

3. TEAM XTINA: Rob Taylor defeats Jeremy Gaynor on Maroon 5’s “Animals” | My favorite part of this showdown? Xtina riffing on Adam Levine’s melody line during rehearsals. And while I respected the freshly energized coach’s efforts to push these fellas outside their comfort zones, the end result was a little ho-hum. Jeremy’s physicality on stage seemed to mess with his pitch, while Rob’s high notes came off as slightly unpleasant — despite their accuracy.

2. TEAM BLAKE: Corey Kent White defeats Jacob Rummell on Hunter Hayes’ “I Want Crazy” (Jacob stolen by Pharrell) | I’m not gonna lie: I found this Battle to be something of a draw. Jacob took more intriguing liberties with the melody, to be sure, but his emotional investment in the lyrics never went past surface level. Squinty McHunkyface, meanwhile, played it more straightforward country — but I’m not sure I came away with any sense of his artistry. For a minute, I got excited that Blake might choose the poppier of his two contestants — opening up Corey for a fascinating Pharrell steal. But, I mean, on a show that show flat-out spoils its Steals prior to commercial breaks, I’m not sure why I was expecting the unexpected.

1. TEAM PHARRELL: Sawyer Fredericks defeats Noelle Bybee on CCR’s “Have You Ever Seen the Rain” | Noelle’s Quilted Northern delicacy was easy on the ears — but her tone went a little haywire whenever she stretched beyond her limited range. When Sawyer crushed it with his harmonies and made the classic-rock jam sound as fresh and new as a magnolia bud in late March, Pharrell had no choice but to go with his four-chair turn. I seriously can’t wait for the kid to get pushed (just a tiny bit) outside his classic rock/folk comfort zone.

With that said, I turn things over to you.

What did you think of Night 4 of the Season 8 Battle Rounds? Who was your fave? Did the coaches get it right? Take our poll below, then expand on your thoughts in the comments!