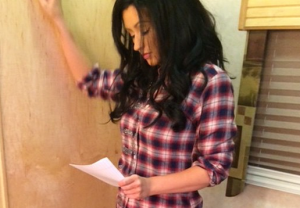 To paraphrase “Dirrty,” it’s about time for Christina Aguilera‘s arrival — in Nashville. And now we have an idea of what that entrance will look like.

The pop star/Voice coach on Tuesday posted a photo to her Instagram account showing her — with dark hair! — on the ABC drama’s set. The caption reads: “Jade’s been busy studying her lines. Can’t wait for #Nashville!”

Her character, Jade St. John, is described as “a chart-topping pop princess who yearns to unleash her inner twang on a country record — and might finally get the opportunity during a two-night stand in Music City.” Aguilera reportedly will appear in multiple episodes.

See the full photo below:

Do you have theories on how Aguilera’s Jade will fit into the Nashville scene? Hit the comments and let’s hear ’em!