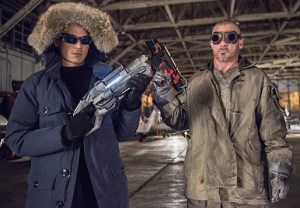 Captain Cold won’t be going it alone in The CW’s buzzy spinoff project that will mash up characters from both Arrow and The Flash.

As reported by our sister site Deadline, Dominic Purcell has boarded the series, which is being eyed for a midseason 2015-16 launch, as Flash pyro Mick Rory aka Heat Wave.

As previously reported, the “team-up” spinoff will also star Arrow‘s Brandon Routh (who plays Ray/The Atom) and Caity Lotz (formerly Sara/Canary), as well as The Flash‘s Victor Garber (Dr. Martin Stein). Robbie Amell, it was reported over the weekend, will not be joining Garber as the other half of Firestorm.

New DC Comics characters to be cast, as first revealed by TVLine, include a time traveler, a female warrior and an African American hero.

Previewing Miller’s role in the hero-centric offshoot, exec producer Mar Guggenheim told TVLine that Leonard Snart/Captain Cold is “the fly in the ointment… [a] villain among heroes. But that’s what makes it fun. We really wanted an x-factor as part of the show.”