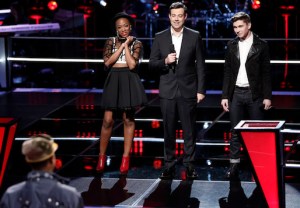 File this one under Things You Never Expected to Hear Carson Daly Utter on The Voice: “You know what? America has to pee. America, go pee and we’ll be right back with Pharrell’s decision!”

Sorry, Carson, but there’s no excuse for that kind of targeted tinkle tirade — unless, of course, you’re about to embark on a road-trip with a toddler in tow.

Then again, it did take Pharrell Williams a ridiculous amount of time to call a winner in Monday’s toughest Battle Rounds matchup — the epic rocker ballerina Kimberly Nichole vs. the swagodocious Lowell Oakley. So, maybe we ought to forgive the typically inoffensive host’s uncomfortable expression of concern for our weary bladders.

Actually, come to think of it, Carson’s off the hook — mostly because he presided over a rare two-hour Battle Rounds contest that did not result in a single miscarriage of justice. I mean, yeah, there were two instances (Lowell vs. Kimberly and India vs. Clinton) where perhaps it came down to a matter of taste — but both of the “losing” vocalists in these cases were quickly stolen by rival coaches. And the only other close call (Treeva vs. Katelyn) was merely a decision about who’d be Team Xtina cannon fodder.

Great singing? No brutal carnage? All emotions unofficially sponsored by Pharrell’s “Happy”? Let’s hope it’s the start of a trend!

While the positivity flows, let me get to ranking tonight’s Battle Rounds in order from least- to most-promising winner:

6. Team Xtina: Treeva Gibson defeats Katelyn Read on Florence + The Machine’s rendition of “Addicted to Love” | Xtina’s advice to add an ethereal layer of falsetto over the verse was awesome — but Treeva’s runaway pitch and Katelyn’s off-putting pronunciations made this a “what could’ve been” type of party as opposed to anything that’d make me want to press “rewind/repeat.”

5. Team Adam: Barry Minniefield defeats Jack Gregori on Joe Cocker’s “Feelin’ Alright” | The matchup of Season 8’s Men of a Certain Age was all but wrapped up at the song-choice stage — Barry’s mighty soul growl proving a much better fit than Jack’s pedestrian twang. But Barry ran up the board, so to speak, by really digging into the melody and actually looking like he was having the time of his life — two qualities that were in short supply on Jack’s side of the stage.

4. Team Blake: Kelsie May defeats Brenna Yaeger on Bobbie Gentry/Reba McEntire’s “Fancy” | Note to Blake: Please, please please never assign “Fancy” to a gal under the age of 30. It’s a song told from the viewpoint of a grown woman looking back on that dismal time her mother kicked her out of the house and encouraged her to make a better life through prostitution. Despite the “yikes!”-iness of hearing 16-year-old Kelsie tell this hardscrabble tale, it was clear she had stronger pipes and a superior sense of rhythm compared to her 19-year-old rival. Xtina was right that both girls could use a lesson in dynamics, but if Kelsie proves a quick study, she could find herself on a Danielle Bradbery-like trajectory (only with slightly livelier facial expressions than the Season 4 champ).

3. Team Xtina: India Carney defeats Clinton Washington on Rihanna’s “Stay” (Clinton stolen by Adam) | To paraphrase the Rihanna’s lyrics, “Not really sure how I feel about this Battle…” I mean, it’s clear that India and Clinton have immense instruments and enviable vocal control, but their embellishments added wayyyy too much dressing to a simple salad — and the end result, while “impressive” I suppose, felt emotionally limp. I’d also have cut the “dramatic hand-touching” choreography in favor of something more spontaneous, but now I’m just sounding like Cranky McComplainerston.

2. Team Pharrell: Caitlin Caporale defeats Briar Jonnee on Alicia Keys’ “Fallin'” | Caitlin is one of those rare vocalists who can stretch her voice to its absolute upper limits and yet maintain a rich, full tone — a quality that served her very well on Alicia Keys’ crazy-range-y ballad. If Pharrell can walk that fine line of finding songs that showcase Catilin’s power — without making her come off as a future Vegas side-stage act — she might be, as Adam noted, a contender to inherit Craig Wayne Boyd’s crown and lasso.

1. Team Pharrell: Lowell Oakley defeats Kimberly Nichole on “Big Mama” Thornton’s “Hound Dog” (Kimberly stolen by Xtina) | No way Lowell actually “defeated” Kimberly — did you see adviser Lionel Richie practically fall off his chair when she opened her mouth to sing? and did you catch her utterly boss “Hallelu” hand gesture/twirl? — but in true Pharrell fashion, this appeared to be a calculated decision to ensure both contestants would survive. If NBC’s “coming up after the break…” hadn’t spoiled the inevitable Steal, I might’ve panicked. But knowing that Kimberly wouldn’t get eliminated, I was able to enjoy Lowell’s victory — if only because his deep dig into the spirit of the blues anthem and spotless pitch are also deeply worthy of the Knockouts. To quote Blake’s feelings about Pharrell pitting two of his best in head-to-head combat, “What is wrong with you?!”

OK, your turn. What did you think of Night 3 of The Voice‘s Season 8 Battle Rounds? Who were your faves? Take our polls below, then sound off in the comments!