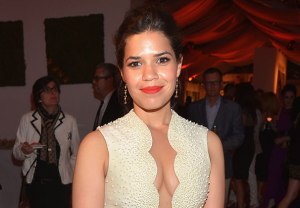 Ugly Betty is headed to a strip mall near you.

Emmy winner America Ferrera has landed the female lead opposite Mad Men‘s Ben Feldman in NBC’s Superstore, a single-camera comedy pilot about a disparate group of employees working at a big-box store in middle America, and the love story that will ultimately unfold among them.

Ferrera, in what would be her first major TV gig since Ugly Betty signed off in 2010, will star as Cloud 9’s longtime floor supervisor Amy, who is initially put off by newbie Jonah’s (Feldman) unconsciously superior attitude, as well as his clowning around on the job. Despite a rocky start, the two quickly bond as Jonah gets Amy to find more joy at work, and she starts to become quite allured by the new hire.

In addition to starring, Ferrera will retain a producer title on the potential series.

The Office writer-producer Justin Spitzer penned the script and will serve as EP.