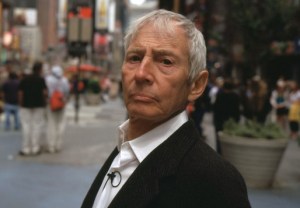 New York real estate scion Robert Durst — the subject of the HBO docuseries The Jinx: The Life and Deaths of Robert Durst — was arrested in New Orleans on Saturday on charges of first-degree murder, for the 2000 killing of friend Susan Berman.

The arrest came one day before The Jinx was to air its finale (Sunday at 8/7c), capping producers Andrew Jarecki and Marc Smerling’s seven-year investigation of Durst’s suspected involvement in Berman’s death and two other possible murders (including that of his first wife, Kathleen, who disappeared in 1982).

Durst previously was charged in the 2001 shooting and dismemberment of a Texas neighbor, though he claimed self-defense and was later found not guilty.

The case of Berman’s death was reopened after the HBO series’ producers contacted the Los Angeles district attorney’s office with new evidence that their investigation had turned up.

HBO on Sunday issued a statement saying, “We simply cannot say enough about the brilliant job that Andrew Jarecki and Marc Smerling did in producing The Jinx. Years in the making, their thorough research and dogged reporting reignited interest in Robert Durst’s story with the public and law enforcement.”