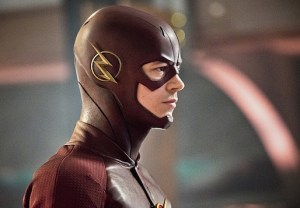 Leading into The Flash‘s PaleyFest Q&A on Saturday, a teaser reel included Laurel Lance’s introduction to Cisco (during his and Det. Joe West’s Arrow crossover). Upon learning she is the Canary, the S.T.A.R. Labs fanboy discloses his crush on the costumed crimefighter: “I love you!”

* Kreisberg acknowledged that Episode 9, in which we first spied Reverse Flash — including as he seemingly fought himself aka Dr. Wells — presented “a bunch of things that do seem impossible.” But “very soon,” he said, viewers will learn “how you were able to see what you saw.”

* Patton speculated that if and when iris learns Barry’s secret, “It’s going to be a huge sense of betrayal,” given that her father also kept her in the dark. “It’s going to change everything.” Speaking of the West family, the producers said that an “amazing” upcoming scene between Joe and Harrison will touch on the mystery of Iris’ mother, a topic that will be “deal with more directly in subsequent seasons.”

* Another burning question — Who is feeding and otherwise tending to the prisoners in the Pipeline? — will be answered imminently, as the S.T.A.R. Labs team also is forced to confront their morally questionable role as “judge and jury” in the metahumans’ entrapment.

* Asked if the CW hit might ever dive into one of DC Comics’ grander arcs a la Crisis on Infinite Earths, Kreisberg revealed, “There’s a fairly big Flash storyline from the comics that we’re going to tackle in the future.”

* Similarly, might Flash “family” members such as Wally West or Bart Allen ever surface on the show? “That’s our hope,” Berlanti said, though no sooner than Season 2, he said.