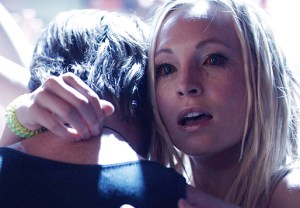 Thursday’s Vampire Diaries, the first episode directed by star Ian Somerhalder, was brought to you by the letter “R.” As in “ripper.” As in that thing half the cast is slowly evolving into.

Actually, let’s back up for a minute: A freshly dehumanized Caroline was knocking back tequila shots at a local watering hole (not the Mystic Grill!) when she came across a familiar-ish face. “Liam, the boy I totally forgot existed!” she exclaimed upon her encounter with Elena’s med-school ex, thus solidifying my already unfathomable love for her.

What transpired was a bizarre blend of awkward flirting, aggressive making out and, ultimately, bloody nomming — but can we all agree that Liam totally deserved what was coming to him? Like, how much of a garbage person do you have to be to take advantage of a vulnerable girl who buried her mom four hours earlier? Not cool, bruh.

Understandably concerned about her friend — and also likely fearing for the rest of her exes — Elena assembled a team to confront Caroline at the Whitmore warehouse party, for which she’d been “recruiting cute boys.” (Have I mentioned what an excellent event planner Ms. Forbes would make?)

Anyway, like most of Elena’s plans, Operation: Capture the Crazy Lady backfired in a big way, with Caroline compelling Liam to perform open heart surgery — or, actually, just open-heart theft — on poor Sarah Salvatore. Not even this heartfelt plea from Stefan, who finally manned up and confessed his feelings, could snap her out of her madness: “I like you, Caroline. I don’t know when it became more than friendship, but it did and it scared me.”

In the end, Caroline gave Stefan an ultimatum — turn off your humanity, or Sarah loses her heart — and he was forced to do it, as he assumed Elena wouldn’t be able stop Liam in time. (Elena actually did end up stopping Liam, which means she technically broke his wrists for nothing, but I take it as payment for him hooking up with Caroline earlier in the hour. He was never meant for surgery, anyway.)

Oh, and did anyone else think it was weird that Stefan asked Elena to bring him back? Does that mean she’s still his emotional trigger? Was that a not-so-subtle message for long-suffering #Stelena fans? What does it all mean?!

GONE MOMMY GONE | With a little assistance from Kai — I know, Kai being “helpful” is a strange concept to me, too — Damon learned way more than he ever wanted to know about his mother. For starters, Lily Salvatore didn’t die of consumption in 1858; she turned into a vampire, fled to Europe and killed upwards of 3,000 people. (So, apparently, Ripping is hereditary?) Damon is hell-bent on tracking down the other Ascendent and freeing his mother from her prison world, but like, we can all agree that’s a terrible idea, right? Some parents should stay out of the picture on this show! 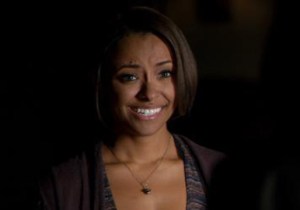 ‘SUCK IT, 1994!’ | Finally back in the 21st century, Bon-Bon was ready to pop bottles and celebrate alongside Mystic Falls’ finest, excluding Kai, the one person she never wanted to see again. So of course Damon ambushed her with a surprise reunion — they both needed her help to pull Lily out of the prison world — which went about as well as could be expected. In fact, I believe Bonnie’s exact words were: “If I see your face again, I will melt it off.” (Look, I know Kai isn’t an angel, but can we please not threaten that face?!) Of course, Bonnie’s confrontation with Kai paled in comparison to her fight with Damon. I guess we can kiss that brief friendship goodbye…

Other Noteworthy Bites:
* This episode, though very good, was severely lacking in Vitamin D(onovan).
* Enzo and Sarah? is that going to become a thing?
* I legitimately laugh out loud every time someone mentions Jeremy being at art school. The truth’s got to come out eventually, right? Like, when he literally never posts pictures of his work on Facebook?

TVD fans, your thoughts on this week’s episode? Were you as impressed by Kat Graham’s big moment as I was? How’d Somerhalder do as a director? Drop a comment with your thoughts and theories below.