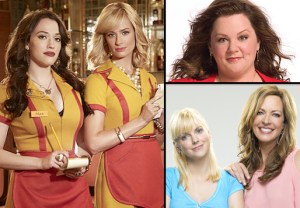 After about 24 hours of social media-fed rumors, fans of CBS comedies can now officially rejoice: Mom, Mike & Molly and 2 Broke Girls all will be back for another season, the network confirmed Thursday.

The Anna Faris-Allison Janney comedy was renewed for Season 3, the Billy Gardell-Melissa McCarthy sitcom will return for its sixth go-around, and Kat Dennings and Beth Behrs will keep slinging hash for a fifth season.

MOM picked up for next year! Thanks, fans from all of us at MOM!

Are you excited about the renewals? Sound off in the comments!