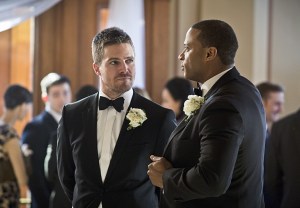 Looks like Ray Palmer will be suiting up as more than just the Atom during Diggle and Lyla’s wedding on Arrow.

In the following photos from the March 25 episode, titled “Suicidal Tendencies,” Felicity’s new guy also appears to be officiating the nuptials.

But somehow, we don’t think that gig is what’s got him and best man Oliver facing off in their costumes.

As executive producer Marc Guggenheim previously teased, Ray will “go about things in a very different way than the Arrow does. And he’s not a part of Team Arrow. Right now, he’s just a very smart guy in a very, very powerful suit. Oliver’s definitely going to have an opinion, and the first instance of that will be in Episode 317.”

Click through the gallery to check out everyone dressed in their finest — baby Sara! — then hit the comments with your thoughts on Dig’s big day. (Felicity totally caught the bouquet, didn’t she?)