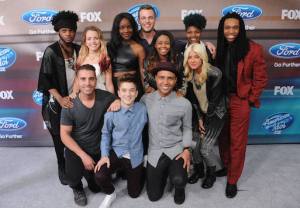 First, the bad news: The remaining contestants of American Idol Season 14 have missed their chance to bring MC Lyte’s “Cold Rock a Party” back into the public consciousness.

The good news? TVLine’s got your exclusive first look at the full list of song spoilers for tonight’s two-hour installment (8/7c on Fox) — the first live telecast of the season.

Not only will the Top 12 perform for the second time this week — under the fairly loose theme of “Get the Party Started” — but one singer will be eliminated (most likely at the end of the telecast) based on voting results of Wednesday night’s “Audition Song Redux” extravaganza.

(Fret not, Joey Cook’s absence from the Season 14 group photo above appears to be coincidental, since the official American Idol Twitter account confirms she was indeed on the red carpet at the Top 12 finalists party where it was snapped.)

Anyhow, here’s the full set list for the episode:

What’s more, Empire‘s Jussie Smollett and Bryshere “Yazz” Gray will perform the Season 1 soundtrack cut “No Apologies” during the episode, while possible future Emmy nominee Taraji P. Henson (who stars on the smash-hit drama as the inimitable and wildly quotable Cookie Lyon) making an appearance.

Whose song choices are you digging? Whose are making you say “Yikes!”? Hit the comments with your thoughts!
https://www.youtube.com/watch?v=Ypu_8XhavZ8