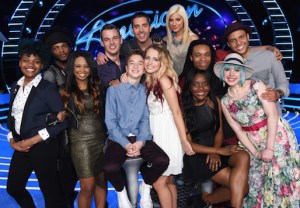 Anybody know a ritual to ward off Disney princess ballads — as well as soundtrack cuts from Armageddon, Titanic and The Bodyguard?

TVLine has learned exclusively that the theme for American Idol‘s Top 10 performance telecast (next Thursday, March 19 at 8/7c) will be “Songs from the Movies.”

The guidelines for film-related ditties in previous seasons have been more flexible than Olympic gymnasts — pretty much encompassing any track that’s been featured in a prominent film or appeared on a major motion-picture soundtrack.

During the live episode, one contestant will be sent to the guillotine based on America’s votes from tonight’s “Get the Party Started” installment – check out song spoilers here — while Jennifer Lopez will perform “Feel the Light” from the movie Home.

Stoked about Idol returning to the movies? Any suggestions for upcoming theme weeks? Hit the comments with your thoughts!