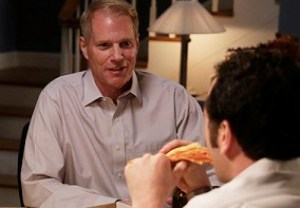 Comrades, here’s a scoop for this Wedneday’s The Americans (FX, 10/9c) that we simply can’t keep covert: “Nothing will ever be the same again in a couple of areas of our show after this episode,” star Noah Emmerich warns.

After two-and-a-half seasons of tightly kept secrets and close calls, this week’s hour “delivers on a bunch of them,” teases the actor, who helmed the installment.

Below, Emmerich also talks about Stan’s complicated feelings for the many women in his life and what his deepening friendship with Philip means for his job at the FBI. Plus, he reveals how he escaped co-star Matthew Rhys’ hazing as a first-time director.

TVLINE | How did the other actors react to your directing? A lot of times, the cast tends to appreciate it, because the director is coming at it from their perspective.
I thought that would be the case, too, but Matthew Rhys walked off the set and it took two days to get him back. [Laughs] No, they were incredibly generous and supportive and kind and made me feel great — and also made me look great. They’re all so good that it makes the director’s job pretty easy from the acting point of view. But it was really fun. We, obviously, know each other very well. We’ve been working together now for three seasons.

TVLINE | Having witnessed Matthew’s sense of humor on panels, he seems like the type that would haze you.
[Laughs] Yeah. I think he saw the tension and stress in my eyes and was kind. He didn’t razzle me too much. He was really supportive.

TVLINE | Looking at the other characters as a director, did you learn anything new about them or see Philip and Elizabeth in a new light?
I did. I haven’t spent a lot of time thinking about their characters much. I try actually not to, because it would get in the way of Stan, certainly in regards to Philip. Stan sees Philip how he sees Philip, and I don’t really want to see Philip any other way than that. But when you put on the director’s hat, you have to really expand your understanding of these characters. So I got to revisit the show in a whole new way. It was really interesting. I guess I got to revisit the show more as an audience member, oddly enough, because that’s how the audience connects to the show is through all — or whoever their favorites are — but they’re certainly open to everybody. It gave me a broader perspective on the material and a deeper understanding of the cast.

TVLINE | Are you a little bit more sympathetic to Philip and Elizabeth now?
I’m very sympathetic! Stan’s not, but I am.

TVLINE | This is a very pivotal hour in terms of the plot and Stan’s arc. What’s in store?
This episode actually has quite a few plot points that we’ve been working towards for over a season. There’s some ticking bombs that have been planted in our soil, and some of them go off in this episode. [There are] really big, seismic shifts happening, really large ones that I think the audience has been anticipating for over a season now. 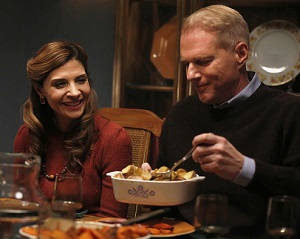 TVLINE | Stan is trying to save his marriage, he’s trying to save Nina, he’s romancing a woman he met at EST. Where is Stan’s heart at?
That’s a really good question. I think his heart is a little bit lost. It’s pulled in many directions. It’s in a clinical depression. He feels tremendously guilty and haunted by Nina’s plight. He feels terrible about his relationship with his wife. There was a long time where he was hoping that was salvageable. I’m not sure if that is. This episode certainly addresses that in a pretty big way. He feels terribly estranged and saddened by his distance from his son. He feels frustrated at work. He’s a little lost. He’s had a slow, tortured journey thus far in his new job in D.C. Hopefully, he’s going to be able to regroup and come back stronger, but it’s tough times for Stan.

TVLINE | He seems to have reached a dead end in regards to helping Nina. Is he still trying to save her? 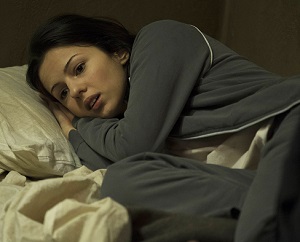 I think he can’t quite let that go. It still gnaws at him, her plight, and he still ponders if there’s anything he can do at all.

TVLINE | The Jennings have had a couple of really close calls with the FBI this season. Are they going to continue to brush up against each other?
I hope so. But I hope they don’t get too close, because then the show’s going to end. [Laughs]

TVLINE | Philip and Stan have gotten pretty close this season. Do you think that makes Stan look bad at his job?
Not to anybody but our audience. Some people question, “How does Stan not know? The neighbors are right there!” The geographical proximity doesn’t really inform Stan’s intelligence. Just because they’re close by, there’s nothing going on at their house that’s particularly unusual. It’s a typical American house with good kids and a working couple. They’re not having KGB meetings in the basement that Stan’s missing. There’s nothing happening there that Stan is missing, really. But the friendship provides all kinds of interesting opportunities for both characters.