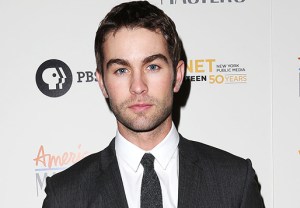 The Gossip Girl star has been tapped to lead ABC’s Boom, in which one of the largest oil discoveries in American history leads to an economic explosion in a North Dakota town, our sister site Deadline reports.

Crawford’s character, a natural-born hustler named Billy, moves to the town of Bakken with girlfriend Kelly in the hopes of escaping substantial debt — potentially risking both of their lives in the process. He joins previously announced cast members Don Johnson (Miami Vice) and Scott Michael Foster (Chasing Life).

Since Gossip Girl ended its six-season run in 2012, Crawford has kept a relatively low profile on the small screen, though he did appear in Glee‘s 100th episode as Dianne Agron’s emotionally-distant love interest.

Does Boom sound like something you’ll invest in? Drop a comment with your thoughts on Crawford’s casting below.