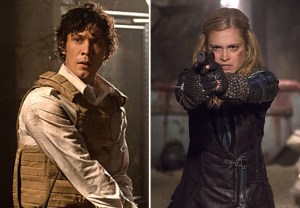 Saving her people from Mount Weather is only half of Clarke’s battle in Wednesday’s season finale of The 100 (The CW, 9/8c), executive producer Jason Rothenberg tells TVLine.

“The other question is: How dark will [Clarke and Bellamy] have to go in order to get this job done?” Rothenberg poses. “They were trying to do it like the good guys before, minimizing civilian casualties, so now what’s left? How are they going to save everyone?”

Rothenberg describes tomorrow’s finale as The 100‘s “Empire Strikes Back moment,” with everyone at their lowest points. “Clarke’s been abandoned and betrayed [by Lexa], Bellamy’s lost the inside army he was also trying to protect and Octavia has also lost everything she’s worked so hard for, her place within the Grounder world,” he says. “Will our heroes be able to bounce back?”

As for how it all ends, here’s what we can say for now: Remember how you felt at the end of Season 1, when you first saw Clarke wake up in that “mysterious white room” and had no idea what was coming next? That’s pretty much how you’re going to feel during the final scene of the Season 2 finale.

“We told the story of Mount Weather in full, so in Season 3, we’re going to tell a different story,” Rothenberg teases. “It’s going to feel like the same show — it’s populated by the same people in the same world — but we’re going to expand the playing field yet again.”

Fellow humans, how do you hope things work out for Clarke and the others in tomorrow’s finale? And where do you hope the series goes in Season 3? Drop a comment with your thoughts and theories below. (And check back after Wednesday’s finale for our spoiler-tastic post mortem with Rothenberg.)