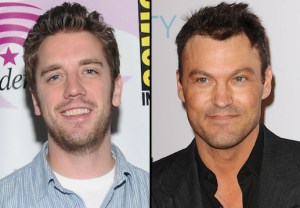 “Brian Austin Green had to withdraw from the project due to a viral infection from which he is expected to make a full recovery,” 20th Century Fox TV said in a statement to our sister site Deadline.

Penned by Dana Klein (Friends), the multi-cam family comedy is told from the point-of-view of Ellen, a working mom (Elfman) who is in constant competition with her perfect, stay-at-home sister-in-law Amy (Super Fun Night‘s Liza Lapira).

Amy’s husband Jack, now played by Harrison, is described as a laid-back rule breaker who does whatever he wants — except if/when it irks his Mrs.

Harrison’s other TV credits include Fox’s Breaking In, V, The Loop and ABC’s upcoming The Astronaut Wives Club.