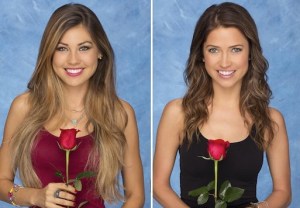 Feminism suffered another sucker-punch at the hands of ABC’s reality-dating franchise on Monday night when Chris Harrison announced the upcoming season of The Bachelorette will begin with a runoff election between Kaitlyn Bristowe and Britt Nilsson.

Yes, the series that typically puts the power in the hands of its titular female singleton will begin by allowing its male competitors to strike the first blow.

“We actually decided not to decide: For the first time in Bachelorette history, we’re gonna have two bachelorettes,” Harrison explained cheerily. “The 25 men on Night 1 are going to have the ultimate say about who they think would make the best wife.”

The host did not provide any additional particulars about how the pack of men will settle on their pursuer.

“It’s an amazing opportunity,” said Britt. “It’s more than I can comprehend.”

“I think we discussed we’ll end up in the same hot tub at one point,” added the typically sarcastic Kaitlyn.

“Some lucky damn guys!” added Harrison, who, if he felt any embarrassment about the twist, certainly did a good job of hiding it.

The role-reversal start to the season is not unprecedented: In Season 6 of The Bachelor, the “ladies” chose between two potential rose-givers: Byron Velvick and Jay Overby. (Velvick “won” the election, though Mary Delgado, the woman he proposed to at the end of the series, was arrested for battery two years later after punching Velvick and giving him a bloody lip.)

The Bachelorette is set to premiere Monday, May 18, according to Harrison, while Bachelor in Paradise will return for Season 2 over the summer.

Thoughts on the twist? And will you be rooting for hilarious Kaitlyn or weepy drama-queen Britt? Take our poll below, then sound off in the comments!