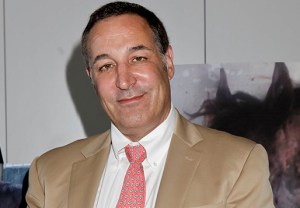 Sam Simon, a nine-time Emmy Award winner who co-created Fox’s The Simpsons, died Sunday in his Los Angeles home after a long battle with colorectal cancer.

The 59-year-old TV veteran was diagnosed with terminal cancer in 2012, at which time he was given only months to live. He immediately began giving his fortune away to various charities close to his heart, many of which were dedicated to the preservation and well-being of animals.

Born in Los Angeles in 1955, Simon received his education from Stanford University before pursuing a career in Hollywood. Prior to co-creating The Simpsons, he wrote for a number of successful primetime series, including Cheers and Taxi.

The following are personal statements from Simon’s Simpsons co-workers, as well as Fox Television Group:

* Simpsons creator/EP Matt Groening: “We will miss Sam’s phenomenal talents, sharp intelligence, and sly sense of humor. He is gone from our industry too soon.”

* Simpsons EP James L. Brooks: “He was truly one of the great ones. He found so much outside the work to give him pleasure and left so much behind for others.”

* Simpsons EP/showrunner Al Jean: “He was a genius and a great humanitarian in ways public and private. I personally owe him more than can be repaid, but I will do my best to help every animal I can in his memory.”

* Fox Television Group: “Sam helped establish the tone and world of the Simpsons in the early years of this landmark series, and his contributions live on. His philanthropy was well-known and a source of inspiration for many. We are deeply saddened by his passing.