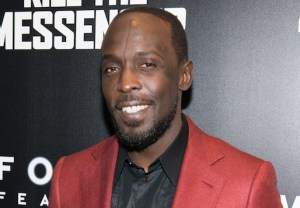 The Wire alum Michael Kenneth Williams is set to headline The Spoils Before Dying, IFC’s follow-up to last year’s The Spoils of Babylon, the network announced on Monday.

In addition, Will Ferrell will reprise his role as Eric Jonrosh, the oft-soused (fictional) author-turned-director who introduced each chapter of his book-to-screen adaptions.

A pulp-noir mystery set in the underbelly of Los Angeles’ 1950s jazz scene, The Spoils Before Dying follows Rock Banyon (played by Williams), a down-and-out pianist who becomes the prime suspect when his lead singer and occasional lover is found murdered along with another man.

With the death of two people hanging over his head, Rock has only 72 hours to clear his name or fry in the electric chair. Determined to prove his innocence, he goes on an elusive quest for the truth that takes him into an abyss of sex, murder, love and betrayal.

In addition to his run as The Wire‘s Omar, Williams’ TV credits include, of course, Boardwalk Empire, Community and NBC’s The Philanthropist.