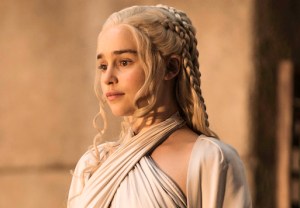 Apple led off its Monday announcement-palooza with the news that HBO’s standalone streaming service, HBO Now, will launch on Apple TV in April, in time for Season 5 of Game of Thrones (premiering April 12).

HBO Now — available on iOS devices and on PCs, via the HBO Now app — will offer instant access to HBO programming as it airs, even to those without traditional cable subscriptions. The cost is $14.99 a month, and new subscribers get a free 30-day trial period.

The HBO Now library includes more than 2,000 titles, including current series such as Thrones, True Detective, Girls and Veep, as well as past programs (including The Sopranos, Sex and the City, The Wire and Deadwood).

“HBO Now offers a new generation of HBO fans many of the best TV programs in the world without a cable or satellite subscription,” Apple SVP Eddy Cue said in a statement. “With the same simplicity as buying an app, customers can subscribe to HBO Now and instantly start viewing their favorite HBO programs as they air. This is huge.”

Is this the streaming service you’ve been waiting for?