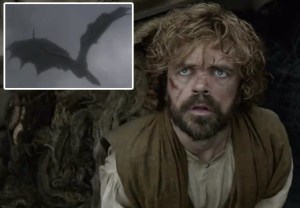 No more Mrs. Nice Mother of Dragons! In the new trailer for Game of Thrones‘ upcoming fifth season, which HBO dropped Monday, Daenerys likens Westeros’ most prominent families to spokes on a wheel — a wheel which she intends to “break.”

Though we’re still a month away from the new season’s April 12 premiere (9/8c), there are enough tasty morsels in this two-minute preview to satisfy even the most ravenous of fans.

Additional must-discuss moments from the trailer include:

* Tyrion feasting his eyes on one of Daenerys’ full-grown babies.
* Stannis plotting his assault on the north.
* Jon Snow making a bold decision about the future of the wildlings.

And those are just the obvious moments. (Trust us, you’re going to be clicking that pause button a lot.) So hit PLAY on the trailer below, then drop a comment below: What are you most looking forward to in Season 5?