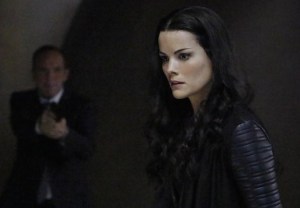 When Asgard’s badass Lady Sif unwittingly delivers trouble to the Agents of S.H.I.E.L.D. this Tuesday (ABC, 8/7c), she’s frankly at a loss to help them out very much.

Specifically, she’s at a memory loss, as the result of an encounter she endured upon returning to Earth, versus an extremely formidable foe.

“She’s on an undercover mission, she tracks down [her target] and they get into a pretty brutal fight,” Jaimie Alexander tells TVLine of her encore. “She ends up having severe memory loss when all is said and done.” The actress is not at liberty to divulge the opponent’s true identity, but notes, “He’s quite a fighter, to have done that to her.”

Detailing the extent of Sif’s sapped memory, Alexander says, “She has no idea that she’s a famed warrior. Not a clue. But she has these [fighting] abilities, so she’s like, ‘Wow, I can do this! But I really can’t tell you why, or how!'” Sif has faint memories from her childhood and knows that she’s from Asgard, yet has a grasp on “no specifics.”

Similarly, Sif — who is found clad not in her usual armor but “undercover” Midgard garb — doesn’t recognize the S.H.I.E.L.D. agents when they are summoned to the scene, which, Alexander says, “is kind of funny.” Until Coulson tries to jog the warrior’s memory with photos from their previous alliance. “She has to apologize, ‘I’m sorry, I don’t remember,'” the actress reports, “and that’s a bit sad for Coulson.”

All told, “There’s a lot of vulnerability with [Lady Sif] this time, more so than there has been before, because she’s in such a strange situation,” surrounded by unfamiliar faces and bested by a brute she cannot remember, Alexander says. As such, Coulson and his team set out to ID the Asgardian’s attacker and uncover the shocking truth behind her original mission, even as they juggle “all this other stuff they have going on internally” with Skye and what not. Amid that “chaotic craziness,” Alexander teases, “Some things come up with Sif and Coulson where they have a couple of disagreements. Usually, Sif is completely on their side, but in this episode she isn’t.”

What’s certain, Alexander allows, is that Sif gets embroiled in some intense combat scenarios as, come hell or high water, she and the S.H.I.E.L.D. operatives endeavor to get to the bottom of the mystery, which just might hit closer to home than anyone suspected.

“[The S.H.I.E.L.D. team] has let her know, ‘By the way, when you’re sent on a mission, you usually don’t stop until you’re done,'” Alexander previews, “so that’s her main concern — finding this being that she was fighting and figuring out why she was supposed to find him.”