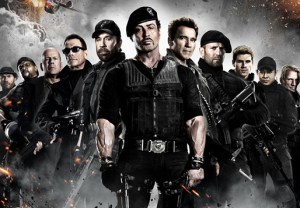 If there’s any space left for another action-packed, crime-fighting TV drama, Sylvester Stallone would like to fill it: Fox is developing the actor’s film franchise The Expendables for a small-screen event series.

The Expendables, whose third installment was released in 2014, follows a group of elite mercenaries — led by Stallone’s Barney Ross — who undertake different missions in order to get revenge on their enemies.

Per our sister site Deadline, the TV adaptation will be “a fun action drama that unites iconic TV stars as a new team of highly skilled heroes who are on a mission to stop a dangerous terrorist.”

Stallone, who also writes and directs the films, will executive-produce the event series alongside franchise vet Avi Lerner.

Though no one has been cast in the project yet, The Expendables‘ latest film included Harrison Ford, Arnold Schwarzenegger, Mel Gibson and Antonio Banderas.

Your thoughts on an Expendables TV series? Drop ’em in the comments section.