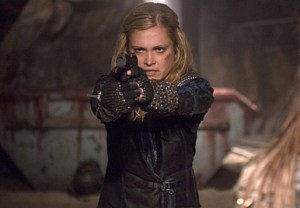 Fresh off Lexa’s gut-wrenching betrayal, Clarke and her fellow Arkers need to think of a Plan B — and fast! — to save themselves in Wednesday’s season finale of The 100 (The CW, 9/8c).

But like most things on this show, that’s much easier said than done, especially judging by the batch of just-released photos from the episode, which finds most of your favorites chained to the wall in a state of torture. (And then there’s Raven, who’s straight-up bleeding out from her leg.)

Per The CW, here’s what we can expect in the final hour of Season 2:

The journey to the City of Light continues, and Jaha makes a move that shocks Murphy. Clarke receives help from an unexpected source, a visitor surprises Octavia, and Lincoln gets his revenge. Meanwhile, at Mount Weather, Cage moves forward with his mission and Bellamy and the group struggle to break free.

Fellow earthlings, do you think everyone will survive the finale? If not, who won’t make it? And now that you’ve had a night to sleep on it, are you still mad at Lexa? Browse the gallery of finale photos below, then drop a comment with your thoughts and theories.