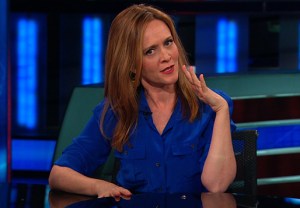 Looks like Comedy Central is down one more potential Daily Show anchor.

Samantha Bee, a correspondent for the cabler’s late-night news satire show, will host her own series on TBS, the network announced Thursday.

Bee’s new venture, which is still in the early stages, “is being planned as a platform for Bee to apply her smart and satirical point of view to current and relevant issues,” a release from TBS stated.

Bee and husband/Daily Show colleague Jason Jones, whose scripted comedy got the go-ahead at TBS last month, will executive-produce Bee’s venture with TBS.

Jones will star in the scripted comedy, the cast of which also includes Natalie Zea (Justified); the couple also will executive-produce that series.

Bee’s latest project, at least at this early stage, sounds very similar to The Daily Show — and that’s not necessarily a bad thing. Bee, both on her own and as a team with Jones, made many “Who should replace Jon Stewart?” lists in February when Stewart announced his intention to leave the Comedy Central institution.