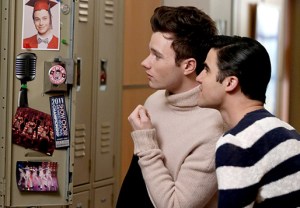 The New Directions’ past, present and future collide in Glee‘s two-hour series finale, which flashes back to 2009 before jumping ahead to reveal what’s in store for Rachel and the gang.

Fox has released a batch of stills from the full-night event (March 20, 8/7c), giving us our first official look at the gleeks’ final curtain call.

Highlights from the flashback episode, appropriately titled “2009,” include Rachel and Kurt “meeting” for the first time, the return of Puck’s mohawk and, of course, not-gay Karofsky.

Photos from the second part of the hour, “Dreams Come True,” find the grown-up gleeks celebrating something — Rachel’s big win at the Tonys, perhaps? — and coming together, as one big happy family, to perform OneRepublic’s “I Lived.”

Click into the gallery below to see the series finale photos in all their glory, then drop a comment: How do you hope Glee ends?