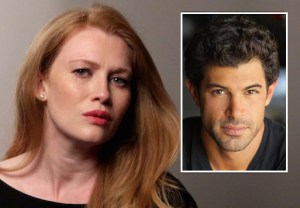 Mireille Enos has found herself a real catch of a man.

Damon Dayoub (NCIS) has nabbed the male lead opposite the Killing star in ABC’s drama pilot The Catch, from executive producers Shonda Rhimes and Betsy Beers, per The Hollywood Reporter.

The project centers on Enos’ Alice Martin, a woman about to get married and conned. Unbeknownst to her slippery fiancé Kieran (played by Dayoub), Alice — who investigates fraud for a living — is not all she claims to be. And when the fiancé’s expertly planned con collides with her perfectly constructed lies, they plunge into a dangerous game of cat and mouse.

Hannibal scribe Jennifer Schuur will pen the pilot, which is based on an idea by novelist Kate Atkinson and Helen Gregory.