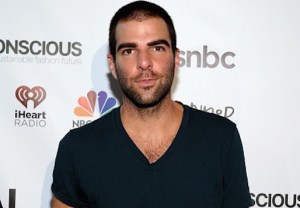 It places the Quinto in the thriller — it does this whenever it’s told.

The actor will play a patient of Gillian Anderson’s Dr. Bedelia Du Maurier for at least one episode — which has us wondering if the show might flash back to that time the enigmatic therapist took a life while under the influence of our titular sociopath.

Whereas Hannibal‘s first two seasons kicked off in April and February, respectively, fans will have to wait for summer 2015 to take a bite out of Season 3 — which will feature a significant time jump following Episode 8.

Tony winner Nina Arianda, The Hobbit‘s Richard Armitage, True Blood‘s Rutina Wesley and The Divide‘s Joe Anderson will all be new additions to the show’s cast this year.

Stoked about seeing Quinto in Bryan Fuller’s twisted landscape? Sound off below!