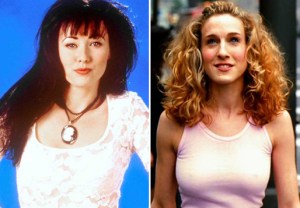 On March 31, Darren Star‘s Younger will premiere on TV Land, introducing viewers to his latest batch of fun, feisty female characters. But first, AOL is taking the über-creator back to his roots — beginning with the zip code that made him a household name.

Star is the latest subject of AOL’s Inspired series, which shines a spotlight on some of the entertainment industry’s most impactful personalities. His episode hit the web today, and TVLine has an exclusive look at two bonus scenes not included in the video.

First up, Star recalls the process of developing a little show called Beverly Hills, 90210, which he — believe it or not — initially pitched to Fox executives as “thirtysomething for teenagers”:

In this next bonus scene, Star reflects on the earlier days of another under-the-radar gem known as Sex and the City: