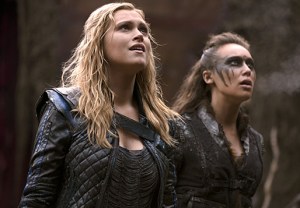 The CW’s The 100 is never short on twists, but last week’s sudden lip lock between reluctant partners Clarke and Lexa took everyone by surprise — including the actors, themselves.

“For a while, one of the main characteristics about Lexa was that love was no longer an option for her, so I figured it was never going to happen,” Alycia Debnam-Carey (Lexa) tells TVLine. “The writers would put sly little suggestions in the script every now and then, but both Eliza [Taylor] and myself were like, ‘No way, it’s not going to happen.’ Then we finally read this past episode and went, ‘OK, it really is happening!'”

Besides the obvious physical attraction — executive producer Jason Rothenberg has confirmed that Clarke is, in fact, bisexual — Debnam-Carey believes Clarke and Lexa connect because they’ve both had to grow up quickly, unexpectedly becoming leaders after the loss of a loved one (see Exhibits Finn and Costia).

“I love how well-received that kiss was, and by such a young fan base,” she adds, explaining that she’s “still a novice” at Twitter and only recently learned what ‘shipping is. “It’s such a positive thing; this type of relationship isn’t something you get to see too often on teen shows.”

Of course, this being The 100, don’t expect Clarke and Lexa to hash out their confusing feelings over a romantic, candlelit dinner for two. Ain’t nobody got time for that.

“They’re about to go battle, which is the most important thing right now for both characters,” Debnam-Carey points out. “It’s what they’ve been working towards all season; as for anything else, we’ll have to wait and see.”

As for what will go down on the two-part season finale — airing March 4 and 11 at 9/8c on The CW — Debnam-Casey remains coy, simply saying that “some tough choices have to be made.”

The 100 fans, are you feeling the love between Clarke and Lexa? And who are you most worried about heading into the two-part finale? Drop a comment with your thoughts, theories and fears below.