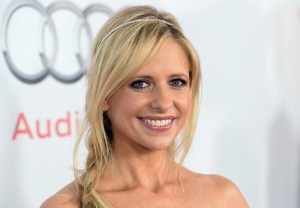 The Force is strong with Sarah Michelle Gellar.

Though details of Gellar’s role are not yet available, she is set to recur on the animated series, which takes place between the events of Star Wars Episodes III and IV and focuses on the crew of the starship Ghost.

“We’re thrilled to have Sarah Michelle Gellar on board for Season 2,” executive producer Dave Filoni said in a statement. “She is a true Star Wars Rebels fan and her passion undoubtedly comes through in the voice recording sessions.”

Indeed, Gellar likely knows a thing or two about the Rebels already: Husband Freddie Prinze, Jr. voices Jedi Padawan Kanan Jarrus on the series, which this past Monday aired its Season 1 finale.