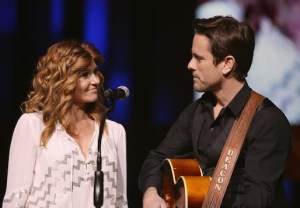 Rayna and Deacon finally croon, smile and canoodle with each other in this Wednesday’s Nashville (ABC, 10/9c) — and these photos from the episode will be a long swallow of sweet tea to fans parched for the singers’ romantic reunion.

The episode finds Rayna celebrating the anniversary of her introduction into the Grand Ole Opry, an event that provides an opportunity for Deacon, Maddie and Daphne to get up on stage and perform with the First Lady of Country Music.

The girls view the night of song as evidence that their mom is reuniting with her former love… and we can’t say we blame them; some of those Deacon-Rayna shots are intense. But given the fact that Deacon is determined to keep his terminal illness from pretty much everyone, anyone else thinking that he’ll push the redhead away by the end of the hour?

Elsewhere in the episode, which guest-stars country singers Vince Gill and Lorrie Morgan and Good Morning America host Robin Roberts, Sadie goes public about her abusive slimeball of an ex on morning television.

Click through the photos below, then hit the comments: Dare we hope that Rayna and Deacon are once more romantically entwined?