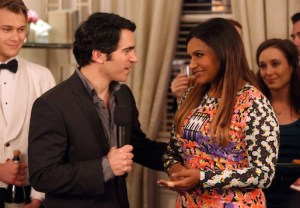 Mindy’s fertility clinic is finally open for business in this week’s Mindy Project, and God forbid our heroine allow such a momentous event to unfold without injecting it with unnecessary drama.

This time, it’s an oldie but a goodie: She lies about Danny, and of course he finds out. Her falsehood concerns his manhood, and it’s a whole big thing before he — true to form — forgives her and ends the episode on a high note. Is Danny just addicted to the crazy? Given what we learn about how (and where) Mindy’s baby was conceived, it’s a distinct possibility.

Read on as we recap what happens in “Fertility Bites.”

ROOKIE MISTAKE | Mindy works harder at readying her fertility clinic than we’ve seen her work her actual job, um, ever. She oversees the painting of the office. She buys an ad on the subway. She stalks Kris Jenner for a Twitter shout-out. (Side note: Thanks be to whomever decided to keep Jenner’s cameo so blissfully short.)

But when Lahiri Fertility Center actually opens, it’s sorely lacking in patients. And though she’s got her fancy fellowship under her belt, Mindy’s sorely lacking in experience knocking people up. So when Morgan brings Cousin Lou and his lady in for a consult — his swimmers have no oomph — they want to know who else she’s helped conceive. Rather than admit her complete inexperience, Mindy spins a story about an impotent Danny and the miracle embryo currently gestating in her womb. “But Danny never needs to know,” she murmurs. Oh Min, Danny is definitely going to know — and soon.

‘MINDY SAID WHAT?!’ | All it takes is a chatty Lou at the clinic’s grand opening party, and soon the whole room — save Danny — is aware that Castellano sperm are quitters. Dr. C gives a very funny speech unintentionally full of infertility jokes (“I popped the cork and nothing came out,” he laments when a Champagne toast to Mindy doesn’t go as planned), and pretty soon, he catches on to what’s being said about his nether regions.

As Danny loudly assures everyone in attendance that he is, indeed, packing a power tool, he also lets us in on how and when the Castellanospawn was conceived: during a crazy New Year’s Eve in Times Square. “The next thing you know, we’re knocking boots under the Lion King billboard,” he shouts.

FEATHERING THE NEST | Diamond Dan stays mad at his baby mama for about five minutes — “You spread lies about my guy. My guy’s the best,” he adamantly informs her — but eventually confesses that he’s worried that with her so busy and them no longer spending all workday together, he won’t see her. So she makes his day (and earns his forgiveness) when she tells him she’s lent her apartment to Dr. Bergdahl — who’s on the outs with his wife and has been living in his car — and that she wants to move into Danny’s place. He’s pleased… though not so pleased that he’s ready to agree to one of her Baz Luhrmann-inspired re-decoration ideas.

Now it’s your turn. What did you think of the episode? Sound off in the comments.