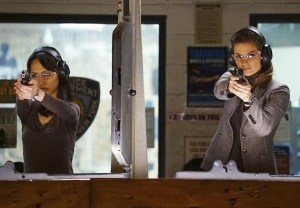 Castle‘s Stana Katic and guest star Linda Park (Star Trek: Enterprise) put on quite a gun show in the first photos from the ABC drama’s next episode.

Park also exhibits a fancy bit of footwork, as well.

In “Hong Kong Hustle,” airing March 16, Castle and Beckett team up with a competitive, high-powered Hong Kong detective who has information about a murder victim. But as Beckett digs deeper into the case, she realizes neither her Hong Kong colleague nor the victim may be quite who they seem.

Castle boss David Amann previously described Park’s character, Inspector Zhang, as “kind of like Beckett, except even better, so that puts Beckett in a bit of a tailspin, to be dealing with somebody who in her eyes is more accomplished and proficient.”

Check out the photos from Linda Park’s Castle visit below.