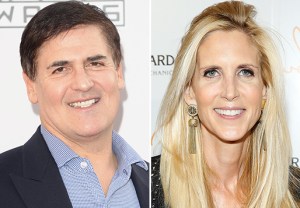 The only thing crazier than the concept of an actual sharknado is the latest crop of actors(?) confirmed to appear in the Syfy saga’s upcoming third installment.

Syfy on Monday added two more names to Sharknado 3‘s roster: mega mogul Mark Cuban and noted maniac Ann Coulter, who will be playing the President and Vice President of the United States of America, respectively. So in case you were wondering, yes, this is going to be a horror movie.

Sharknado 3 will once again revolve around Fin (Ian Ziering), April (Tara Reid) and Nova (Cassie Scerbo) as they battle the titular freaks of nature — only this time, the fight will take them all the way from Washington, D.C., to Florida.

Your thoughts on Cuban and Coulter’s casting? Drop ’em in the comments section below.