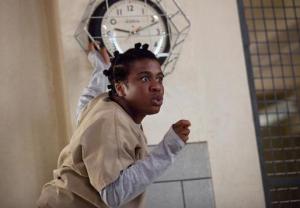 Prepare to get back on the chain gang on June 12: That’s when Netflix’s prison dramedy Orange Is the New Black will return for a third season, the streaming video service announced Monday.

In addition, the much-buzzed-about Wet Hot American Summer: First Day of Camp — a continuation of the 2001 cult comedy film — will be available for viewing on July 17.

Other premiere dates released Monday include those for the Wachowski siblings sci-fi drama Sense8 (June 5) and a stand-up comedy special from Undateable star Chris D’Elia (April 17).

Release dates for Narcos, a drama starring Pedro Pascal (Game of Thrones) as a Mexican DEA agent out to kill cocaine kingpin Pablo Escobar, and Club de Cuervos, a Spanish-language soccer comedy, are forthcoming. Similarly, Between, a Canadian thriller starring Jeannette McCurdy (iCarly), will be available for viewing sometime in May.

As for Netflix’s awaited resurrection of A&E’s Longmire, a spokesperson confirms that a release date for Season 4 has not yet been set.